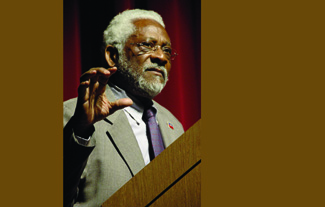 A Marshall Plan for Haiti by Raymond Joseph

After World War II, the United States instituted a plan for the recovery of war-devastated Europe, initially entitled the “European Recovery Program,” enacted into law in 1948 with bipartisan Congressional support, and renamed “The Marshall Plan” for Secretary of State George C. Marshall, who first urged such a plan. Only a similar plan, I suggest, can change Haiti, the devastation of which has not ceased since its independence in 1804.

In fact, the situation of the country has worsened, even though some $13 billion was collected by the United Nations and others to “build [it] back better” after the devastating earthquake of 2010. And $4.2 billion of the PetroCaribe Fund from profits from Venezuelan fuel products earmarked for development disappeared between 2008 and 2017.

It is time for an accounting and a concerted effort for the economic development of that impoverished nation, to stop it from being a headache of hemispheric proportions in the Americas. Almost all the countries of the hemisphere are now experiencing the results of years of exploitation and neglect of the first Black Republic in the world, now defined by the thousands of refugees fleeing hell on earth and being airlifted back to the furnace.

Consider what the United States did in 1948 for Europe, following the Allied victory against the forces of Fascism and Nazism. After destroying much of Europe, the Americans helped in rebuilding it, with the U.S. Congress approving more than $13 billion, equivalent to $144 billion in 2020, according to Wikipedia. Eighteen countries benefitted from the U.S. largesse, with the lion’s share going to Great Britain, France and Germany.

Among measures envisaged by the Marshall Plan were those that would help the economies of the European countries flourish, such as cutting down on regulations that impede development and enhance programs that reduced state barriers and increased productivity.

Compare such generosity with what happened in the case of Haiti when that country was first to defeat slavery and stop French hegemony in the New World, paving the way for the new American nation to become the country it is today. Haitians are responsible for the Louisiana Purchase by the Americans, with the country doubling in size when the former slaves defeated the mighty army of Napoleon Bonaparte in 1803. With that de feat, France lost its headquarters in the New World in Cap-Français, the French Cape, with is now Cap-Haitian. Thus, did the French dream of an empire in the New World came to naught. Imagine, the Americans paid only 80 million francs, then equivalent to $15 million, for that vast expanse west of the Mississippi River, to the Rockies, and from the Gulf of Mexico in the south to the border with Canada. Today, it’s 14 states.

Instead of being thankful to Haiti, the United States joined France and all the enslaving powers of the tines to declare a crippling embargo on the new nation, to dissuade any copycat movement from their own slaves. By 1825, the embargo was reinforced when Charles X, using gunboat diplomacy, imposed a debt of 150 million francs, reduced to 90 million, on Haiti, for the loss of property, including slaves. It’s reported that this amounted to the equivalent of $21 billion in today’s dollars.

The United States supported France in such a heist, the last penny of which was paid in 1947 to the precursor of Citibank, which had assumed collection for France when the American Marines invaded Haiti in 1915 and remained for 19 years.

Evidently, Haiti’s economy, embargoed and mortgaged for a century and a half, couldn’t support a growing population. And the U.S. wouldn’t recognize the new nation until President Lincoln did in 1862.

When the Americans occupied Haiti and the Dominican Republic Haitian workers were trucked to the Dominican Republic to turn that nation into the sugar capital of the world. Haitian laborers were also brought to Cuba, then a close U.S. ally, to help that country’s sugar cane industry. Today, Dominican Republic has a booming economy, with Haiti its second economic partner after the U.S. Dominicans export about $2 billion annually in agricultural and manufactured products to Haiti, while Haiti’s exports to its neighbor amount to $100 million. Cuba, protected by the Communist bloc since Castro’s revolution of 1959, now sends “medical missionaries” to various countries in Africa and elsewhere, such as Haiti, and recently to Italy, when that European country was among the first in that continent to be visited by the COVID-19 pandemic.

The world had a chance to help Haiti after the 2010 earthquake that caused more than 200,000 deaths and 1.5 million homeless. Nations around the world came to the rescue, with the United Nations getting donations from about 130 countries. From the reported $13.5 billion collected for Haiti, three fourths are said to be by the UN and one fourth by charities, the famous Non-Governmental Organizations, known as NGOs, which gave Haiti the name of “NGO capital of the world.” Former President Clinton, as UN Envoy to Haiti during the earthquake, cochaired the Interim Haiti Recovery Commission (IHRC) with then Haitian Prime Minister Jean-Max Bellerive. Whatever happened with the $3 billion initially approved for the IHRC, as was reported? There’s little to show in Haiti for those billions.

In that vein, Haitian officials should also account for the $4.2 billion of the PetroCaribe Fund, earlier mentioned. The presidents and prime ministers in office during that period who are still alive should give an accounting of what happened with these funds.

I contend that a Marshall Plan for Haiti can begin with all the funds for Haiti that are unaccounted for. Some of it is in offshore banks, and sleuths from the U.S. government can’t say they don’t know where some of the loot is. Those funds should suffice as seed money for a project that should be spearheaded by the United States and those countries called “friends of Haiti,” working with a an interim Haitian government which, breaking with the past, would make honesty and transparency the hallmarks of an administration determined to make Haiti the jewel it should have been all along. A Haiti at work will keep Haitians at home, in a country of law and order, having rid itself of gangs and ready to welcome back its able sons and daughters spread all over the world.