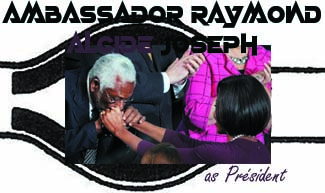 A Tribune of Democracy for Interim President of Haiti

The savagery of events in Haiti — the latest being the kidnapping of 17 Christian missionaries — underlines a point that these columns have been pressing since the assassination of President Moise. The crisis on Hispaniola can be resolved only by international intervention. For in Haiti, there is no head of state, no elected prime minister, no working legislature, no functioning national police, nor supreme court. To whom could the international community turn?

Our endorsement for interim president would be Raymond Joseph. He is familiar to readers of the Sun as one of our longest-running and wisest columnists. That, though, is the least of his accomplishments, which began when he was at the Moody Bible Institute in America and did the first translation into Creole of the New Testament. He went on to found, with his brother Leo, the newspaper Haiti-Observateur.

Issued in exile at Brooklyn and circulated world wide, the paper became the leading tribune of democracy in Haiti during the years when it was under the grip of the Duvalier regime. When the Duvaliers fell, Mr. Joseph was summoned to be Haiti’s chargé d’affaires in Washington. Later, under the government that acceded after the flight of President Aristide, Mr. Joseph returned as Haiti’s ambassador in Washington.

In every assignment to which he has been called by his country, Mr. Joseph has served with distinction. He is an unparalleled voice for Haiti. Few if any can match his long record of educating the world on the significance of the slave revolt that created in Haiti the first black republic. And on the role that Haiti played in America’s history (it helped create the circumstances that made possible the Louisiana purchase).

The key point is that Haiti is without a head of state. We understand that in theory, the acting prime minister, Dr. Ariel Henry, is also listed on the Internet as acting president. His government, such as it is, was endorsed in July by the so-called “core group” of diplomats— America, Brazil, Canada, Spain, France, Germany, the European Union, as well as representatives of the UN and the OAS.

Their move in July, following the assassination of President Moise, whose own claim on power was extra-constitutional, strikes us as having been hasty and, in any event, ineffectual. The country is suffering from the want of a serious statesman and a figure with, forgive us, moral authority. Hence our instinct for Mr. Joseph, who has spent his entire adult life in the cause of Haitian democracy.

When we have put the question to Mr. Joseph, he demurred and forcefully. For years he has been marking the failure of foreign interventions in Haiti, including America’s under President Clinton and of the United Nations’ rule that followed. So Mr. Joseph says that, much as he admires the United States, he wants no part of being a puppet for it or, for that matter, the United Nations.

Mr. Joseph favors a “hemispheric” solution, in which a wide array of neighboring countries would recognize an interim conseil d’etat. It would have real, if interim, authority. Haiti’s neighbors would provide the military muscle. On Wednesday, Mr. Joseph notes, Secretary of State Blinken was in Bogota, where he reportedly met with Colombia’s president, Iván Duque, and separately, with 17 of the region’s leaders.

Not being a functioning state, Haiti was not invited (who would represent it?). No communique was issued, though the agenda was topped by the crisis of Haitians fleeing their country and becoming more than a headache for the Latin countries and even the United States. So it is time for Haiti’s neighbors to step up. For the UN, which sent an international force in 2004, and still maintains a mission, has failed.

Outside help, Mr. Joseph reckons, would need to accept Haitian political leadership of civil society to seek a broad consensus for transparent and efficient governance and a plan to develop Haiti. He calls for decentralizing powers of the state, which has been for too long the “Republic of Port-au-Prince.” That is a way for Haiti to become again the “Pearl of the Antilles, even drawing back its able sons and daughters in the diaspora.”

Those who might suggest that Mr. Joseph is too old, we respond that they don’t know him. He is still writing weekly for his own newspaper and working for democracy from dawn to dusk. He is beyond the age of personal ambition. Few can talk as he does of Haiti as a land where freedom was born in this hemisphere and whence Bolivar sailed to liberate Latin America. This is why Mr. Joseph calls his hemispheric plan “deliverance in reverse.” President Biden would be wise to call him.________