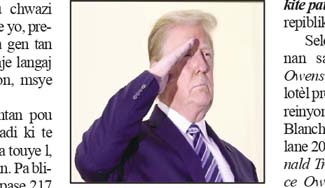 President Donald Trump has done more damage to the United States in a short period than any enemy, foreign or domestic, could have done in a hundred years. These damages were not done only by Trump. He has had many accomplices, one of whom is his most powerful and vocal

Attorney General William Barr. He could have been a check on the president’s illegal and unethical behavior, but he espouses the same cynical view of government as Mr. Trump and encourages the latter’s darkest instincts. In fact, he has turned the Justice Department into a private law firm with only one client: Donald J. Trump.

During Congressional hearings before the House of Representatives&#39; Judiciary Committee, his combative behavior demonstrated his willingness to advance Trump’s political interests, regardless of legality or ethics.

Barr is unapologetically supportive of Trump’s political agenda. He behaves as a Trumpist warrior rather than an independent law enforcement officer whose constitutional duty is to protect this country from the enemy within and without. His failure to hold a press conference to address the White extremist militia’s plot to kidnap and kill a sitting governor is not only troubling but represents a great danger to our democratic principles.

Last Thursday, October 8, agents of the Federal Bureau of Investigation (FBI) and members of the State police in Michigan arrested 13 White extremist militiamen who planned to kidnap Governor Gretchen Whitmer of Michigan, set up a bogus trial before executing her. The self-styled militiamen, known as the ‘Wolverine Watchmen’ had raised concerns among local enforcement officials and the FBI earlier this year when the group showed up at Michigan’s state capitol armed with AR-15 style rifles during a protest against the governor’s decision to close businesses at the onset of the Coronavirus pandemic. Law-enforcement officials and civic groups are concerned that similar private militia groups may turn up at polling sites on Election Day to intimidate voters.

When an arrest is made in such a high-profile case, the Attorney General would have been briefed daily on the investigation and appraised of the pending arrest. Following the arrest, the AG would have held a press conference accompanied by local law enforcement officials and FBI agents to announce the arrest and make it clear that such lawlessness will not be tolerated. In this case, William Barr was nowhere to be found, a serious breach of protocol, considering that the target was a high profile public official. Nevertheless, it is understandable because both Trump and Barr have been using dog whistles to encourage such lawlessness. To add insult to injury, on the day of the arrest, President Trump took to twitter to attack Governor Whitmer.

The president’s racist behavior and those of his enablers have contributed to the rise of White extremists, leading to this plot to assassinate a sitting Democratic governor. It is disconcerting when the Number One law enforcement officer in the country seems to suggest that it is perfectly normal for citizens to resort to violence when they disagree with their political leaders. However, in the United States, there is an enduring democratic principle concerning citizens* rights in dealing with their leadership. When people disagree with their political leaders’ policies, the only way to fight back is via the ballot box, they are voted out. Engaging in armed conflict or violence is an existential threat to democracy and counterproductive to a peaceful existence.

Trump and Barr seem to be oblivious to the danger of their rhetoric. Since his ascendancy to the White House, Trump has encouraged racism to a level never seen before. He repeatedly failed to condemn the racist behaviors of many police officers. He refused to disavow White supremacists, anarchists, and radicals, even when he was given a chance to do so at the first presidential debate with former Vice-President Joseph “Joe” Biden. During a neo Nazi and White supremacist protesters in Charlottesville, Va., he called them ‘very fine people.’ His rhetoric against Democratic governors, especially Governor Whitmer, has simply enflamed the violent nature of some of his most ardent supporters.

Trump is a dangerous demagogue who uses ad baculum to silence legitimate opposition. He does so by threatening his opponents with mean tweets, name-calling, and harassment by violent mobs, and refusal to condemn violence conducted in his name. The militia’s plot to kidnap the governor, someone that Trump has publicly vilified and called an enemy of ‘good people’ is an example of how dangerous the use of threats and appeals to fear can become reality. The Attorney General’s silence in this case underscores the fear that many people express that should Trump lose the upcoming election, the transfer of power will not be peaceful.

This fear is reasonable, considering that last week, Donald Trump’s acting Homeland security chief Chad Wolf acknowledged for the first time that White supremacist extremists ‘played a role in this year’s urban violence in the United States’. This statement is a revision of the ‘;administration’s public descriptions of the political motivations of violent protesters.’ Initially, Wolf attributed the violence in Portland, Oregon, to ‘violent opportunists,’ but, in last week’s revision of the report, entitled the ‘State of the Homeland,’ he attributed the violence to ‘White Supremacists’ and ‘anarchist extremists.’ That was the first time he mentioned, ‘White Supremacists.’ This demonstrates the administration’s unwillingness to enforce the law and denounce violence committed by White extremists.

Since his appointment as Trump’s top cop in February 2019, William Barr’s actions suggest that he is quite comfortable in being the President’s defender and “Enforcer-in-chief.” He displays the same conspiratorial and cynical view of government bureaucracy that some people have. His statement during a recent speech explains his dangerous behavior when he failed to address the plot to kill Governor Whitmer.

‘’Name one successful organization or institution where the lowest level employees’ decisions are deemed sacrosanct, there aren’t’’ Barr said of alleged unhappiness within the Department of Justice among the rank-and-file. He added, “There aren’t any letting the most junior members set the agenda. It might be a good philosophy for a Montessori preschool, but it is no way to run a federal agency.’’